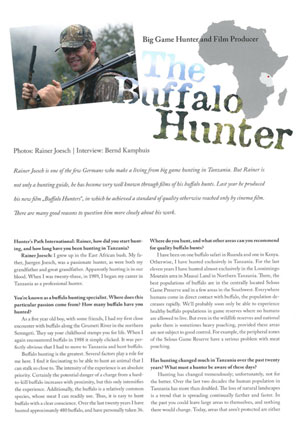 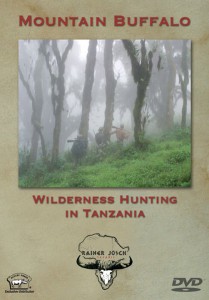 It is rare for us to watch a movie twice, but that is exactly what we did with this production by Rainer Josch and his tracker Lorinyu. This film really deserves to be classified as a documentary—it’s that good. Our one caveat is: If you want a large amount of dead animals, this film is not for you. However, if you want to see huge buffalo trophies stalked on foot in difficult terrain, you’ll love this DVD. It was filmed mostly around Mount Loosimingor in northern Tanzania, and Josch (who narrates the whole movie himself) is the guide on three fantastic buffalo hunts that make you realize that the adventure is still in hunting if you want to seek it out. In addition, the producer has set a price of $29.95, which is well below most current retail prices of quality hunting DVDs.

For the first episode a small crew and client Peter Leffe hike into the mountains and set up a camp—similar to what you would find if you were hunting sheep. There they stalk through thick vegetation to confront buffalo at spear-throwing distances. Peter confronts a HUGE bull buffalo (no measurements are given, but it’s at least 47-48 inches), which he tries to take with his double rifle. The first stalk fails, and we do not want to spoil the movie, so you need to see the film to find out what happens. Next a German client comes in, and Josch and the client stalk a bull in thick vegetation and wound it. The follow-up begins and excitement mounts. The final hunt is by Josch himself who tries for a very old bull with a double rifle and open sights. He has seen this bull often, but he knows his chances of bagging it are not good. In addition, you’ll see the mountains hold a rich and diverse scale of wildlife including elephant, lion, and leopard.

Why is this movie so outstanding? The quality of the footage and the editing and professional narrative all make it a super product. This is real hunting—the way it should be. There are no lazy hunters driving around in Toyotas and stalking for a few hundred yards. The PH is totally committed to shooting only those old bulls that have been thrown out of the breeding herds and are now solitary or in a very small group; consequently, the trophies are HUGE. Filmed over an entire hunting season, this movie is worthy of the Discovery Channel should the officials there care to show a hunting movie! On our rating scale—from one to ten—we feel this one is a 9.5, the highest rating we have ever given. Buy it; you won’t be disappointed!

This movie comes in a choice of languages that you must select when starting the movie; the narration is done in English, Danish, French, Spanish, or German. The buyer should know, however, that the section with the German client has subtitles in English (about 5 percent of the total narration). 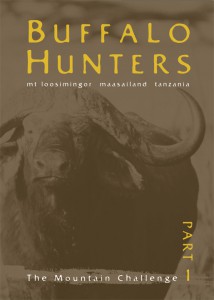 Many of our customers know we praised Rainer Josh’s first DVD—Mountain Buffalo, which we thought was very well done. Now, two years later, they have another DVD—nobody can accuse them of over producing movies!—and again we think this is movie will have a legacy. If you want a lot of shooting, this is not your DVD; however, if you want a very well-produced, completely fair-chase hunt with lots of hard work before the hunter gets a buffalo, this is the flick for you. Hunters climb up Mount Loosimingor, and everything must be taken in a backpack. Hunting is from a tent, and the mountains are cold at night, and this resembles a mountain-game hunt even with the rain! It is interesting to note how the vegetation, only a few thousand feet above the parched dry northern Tanzanian plains, is very lush and green. The buffaloes in these mountains are very challenging to hunt, and to add to the difficulty, Josch—who is the guide and PH—and his longtime tracker, Lorinyo, only want to shoot solitary bulls or very old herd bulls. A few clients are filmed, and it is clear that this is no cakewalk, for you see a young, fit client makes a less-than-perfect shot. The following up, no less than two days, in thick tangle and steep terrain is devilishly difficult. Another client is older but patient and shoots well. As before, the spirit and experience of a true wilderness hunt comes through in spades. The client hunters are German or English, and if German is spoken, English subtitles are provided.

Rainer Josch is both a talented PH and a talented film producer. He likes to make graphically appealing films that focus not just on the kill. This is hard to do because most hunters are interested in seeing the result of a hunt, and lots of kills in a film are sometimes used in the outdoor movie industry to mask a lack of skill on the part of the producers. And yet Josch manages to draw you into his movies with great skill by presenting a great narrative with great footage without a kill every five minutes.

From Darwin, Northern Territories, Australia, the hunters reach the remote Arnhem Land concession where hunters stay in an Africa-like tent camp. OK, let’s be honest: Asian water buffalo, some of whom hardly ever see a human, are not quite as wary as hard-hunted Cape buffaloes. But they are no pushovers, either, and all three rifle hunters shoot with open sites to make the hunt more challenging. And if you pass up a bull or mess up a stalk, you are not likely to ever see that animal because of the vastness of the terrain and the density of the vegetation. Several times the stalks do not work out, and we see the bull hot-hoofing it out of there . . . never to be seen again.

Aided by an Aborigine hunter, the two PHs take one hunter at a time on their hunts. We see the entire hunts from A-Z. As the finale, Rainer Josch himself tries to kill a bull with a traditional long bow. He makes some excruciating close stalks on a few very large bulls and fails again and again. This continues till he is forced to make a decision: use a rifle or fail with a bow? You have to see the movie to see how that ends.

This is part two of a DVD series on hunting the wild bovines of the world that Josch hopes to complete over the next few years. Good footage, sound, script, and editing in this excellent movie. 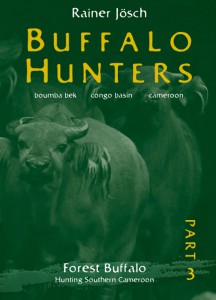 This is the third installment in the buffalo-hunting DVD series by Tanzanian PH Rainer Josch. About four years ago he set out to create a series of DVDs on hunting one variety of buffalo at the time, and so far he has done one film on East African Cape buffalo and one on the water buffalo of Australia. In this film Josch has undertaken what must surely be the most challenging environment in which to film (and hunt) buffalo: the dense rain forest of the Congo basin.

Here, in the Cameroon, we follow the hunting couple of Cordelia and Rudolf Kraeling, both active hunters. Cordelia uses a double .500 Nitro Express, which is considerably bigger than the .375 H&H her husband is using. Now, for those who have seen rain forest hunting films with a few fleeting specks of brown that represent “animals,” get ready for something a better. Quite a bit better as it turns out: The company filmed various live forest buffaloes and the result is some decent footage that gives the viewers a good idea of what the animals look like.

What inspires us is how the cameramen capture the true essence of these dark and hard-to-film dense forests. Two well-filmed encounters with silverback gorillas help to accentuate a film that has better captured the “green hell” of the African rain forest than any we have ever seen. No, the footage is not like that of an East African buffalo hunt, but, yes, this is one darn good rain forest movie and in addition an excellent hunting film.

Also included are good maps as well as footage of the atmosphere of the capital of the Cameroon, Yaoundé, both of which complement the film.